With their choice of program, the Borusan Istanbul Philharmonic Orchestra and piano duo Ufuk & Bahar Dördüncü have certainly enabled the Istanbulite audience of symphonic music to make a huge step forward in their sound worlds: Britten’s Scottish Ballad for piano duo & orchestra, Takemitsu’s “Quotation of Dream: Say sea, take me!” 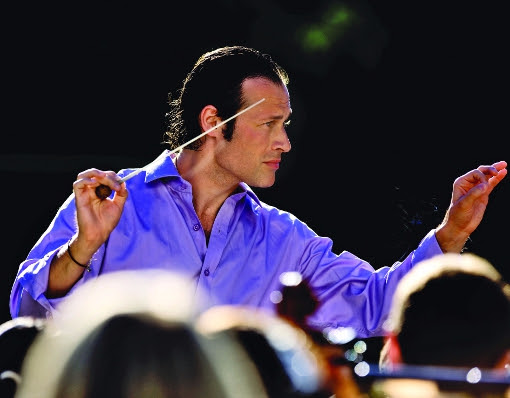 Instead of starting with Britten the concert was opened with Takemitsu; a clever move in my opinion, since the Takemitsu ends softly with a very silky, thin texture flying up to the sky in the clouds, which wouldn’t enable the audience to show its appreciation in an extrovert way. On the other hand the bombastic start of the Scottish Ballad is a nice wake-up call after the dream state.

Takemitsu, the late impressionist, the genius of watercolor painting of late 20th-century music, describes his work as “schizo-eclectic”. It has its own voice and character but one of others as well. Cited in the subtitle is part of a poem by Emily Dickinson, Takemitsu reflecting his own longing for the sea, yet he clearly parodies some motifs from Debussy’s La Mer. Takemitsu excels in obtaining colorful harmonies within clusters. The rendition of the piano duo Ufuk & Bahar Dördüncü was very colorful, swift and volatile. They were always looking and longing for the “right” note to hear and play, which would make sense most out of the harmony. They were also incredibly well balanced in timbre. I wondered if the orchestra had enough time to absorb and internalize the work as a whole. Woodwinds and brass seemed to have a hard time controlling their attacks especially where they needed to cue very delicately, such as the last oboe cue before the reappearance of the first theme in the duo, thus closing the cycle and ending the piece.

Britten left the UK in 1939 not only from rising fascism in Europe but also for the need to determine his own direction. He travelled with his partner, the tenor Pears, to Canada then to the States. After their bohemian sojourns in New York and Long Island, they took up the invitation of duo pianists Rae Robertson and his wife Ethel Bartlett at Escondido in California, where the Scottish Ballad – dedicated to them – was mostly written. With its homophonic textures and angular rhythms, it's certainly contrary to Takemitsu’s music. Moreover, it takes quite a while before settling into a relatively dreamy state. Even though many critics back then didn’t label it as a “strong” piece, I enjoy it. Last night’s interpretation lacked rather the bombastic orchestral effects. It might not be an interesting piece to play for the orchestra, especially when the individual parts are taken into consideration, but it can have a convincing effect once every performer is convinced! The piano duo tried to pull up the orchestra, but it wasn’t enough. Nevertheless, for a Turkish première it can be counted as a success.

Ufuk & Bahar Dördüncü answered the ovations with one of Ravel’s Valses Nobles et Sentimentales arranged for four hands. There we had the chance to hear real masters of color and timbre. They managed to create an incredible magical atmosphere within seconds and at the end of the piece, the mesmerized audience had hard time to pull itself together and applaud properly. This was my first time listening and hearing the duo live. I was extremely impressed by their very well balanced timbre, which is the decisive attribute for a piano duo. Closing my eyes and just hearing them playing, I had the feeling of an overdubbed stereophonic recording of only one person. I will surely continue to follow them if possible, especially in the impressionistic French and contemporary repertoire.

The second half of the concert was dedicated to Rimsky-Korsakov’s Scheherazade. Being in BIPO’s repertoire for quite a while, it has become almost a standard; nevertheless a standard, which is always interpreted perfectly and praised by the audience. Goetzel preferred to include in this verison, as he also did in their 2014 recording, two traditional Turkish instruments, which are not contained in the original score: oud and qanun. Both of them had very nicely suited improvisational parts, which were interpreted delicately. This suite contains certainly one of the nicest parts written for the first violin of the orchestra. The concertmeister Pelin Halkacı Alkın's rendition was impecable: beautifully singing legatos, tasteful glissandos, perfect intoniation and dynamics. This version is now very well known by the Istanbul audience, but was the perfect to balance the Turkish premières of both Takemitsu and Britten.

I think that BIPO has a very important mission, which artistic director and conductor Sacha Göetzel and the General Manager Ahmet Erenli are taking very seriously, namely to introduce 20th-century orchestral music to Turkish audiences. Together with Cemal Reşit Rey Concert Hall, they are the pioneers of the new sounds and soundscapes in Turkey.